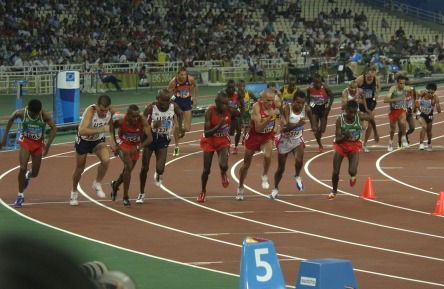 The idea that vegetarians or vegans don’t perform well at sports is quite common and interrelated with the myth that ‘vegans don’t get enough protein’ which will be featured in a future blog posts of this series. For the purpose of this post it is sufficient to say that a proper vegan diet can easily include all the protein required, even if you want to gain muscle.

In an interesting interview, the sports nutritionist Nancy Clark states that while the research on the influence of vegetarian or vegan diets on the performance of athletes is limited, anecdotally they do fine. This is further supported by statements later in the interview mentioning that vegans can certainly get sufficient calories and protein if they have a healthy diet.  One thing that should generally be supplemented in a vegan diet and is also required for good performance at certain sports is vitamin B12, which is nowadays frequently added to soy milk.

While research on the effects of a vegan diet on the performance of athletes is rare, some studies have indicated that a vegetarian diet can work out well for athletes. Examples are in this publication, summarizing earlier research and concluding that vegetarian diets might increase performance in endurance sports and that vegetarian diets include all needed nutrients known. Some studies indicated that exercise increases the iron requirements of our bodies, while vegetarian or vegan diets can sometimes result in insufficient iron intake. While iron levels should generally be observed, this suggests that especially female athletes with a vegetarian or vegan diet have to take care of their iron intake and should consider adjusting their diet in a way to increase it – while staying vegetarian/vegan of course.

Now let me mention some examples of vegan athletes demonstrating that it is possible to be a successful vegan athlete – without having much to say on the exact effects of a vegan diet on athletic performance of course.

Scott Jurek is a famous ultramarathoner who has been vegan since 1999. He won a very large amount of races, such as the Western States Endurance Run – in this case seven consecutive times. Many of his accomplishments occurred after going vegan – a complete list of them can be found here.

Patrik Baboumian, a former bodybuilder, is a strongman competitor who turned vegetarian in 2005 and vegan in 2011 without losing strength. In 2011, albeit before turning vegan, he was awarded the title “Germany’s strongest man”. A full list of his accomplishments can be found here.

Brendan Brazier is a former Ironman triathlete and endurance athlete who has been vegan since more than 20 years. A list of his race results can be found here, including for example winning the National 50km Ultramarathon Championship in 2006 and setting a new record. He also authored several books on the vegan diet. The foreword of “Thrive: The Vegan Nutrition Guide to Optimal Performance in Sports and Life” is written by Hugh Jackman (Wolverine), who received advise by Brazier on meal plans. While Jackman did not go vegan, he reported positive results.

Carl Lewis, a very successful athlete, went vegan in 1990 and his accomplishments include winning several Olympic gold medals. One of his greatest achievements happened in 1991 when he was 30 years old: He broke the 100m world record with a time of 9.86s. He believes that the vegan diet improved his performance and made this result possible.

The list of successful vegan sportsmen could go on and on, these are just some examples in order to illustrate that a vegan diet can be maintained even during extreme athletic performances.

Did you ever encounter this myth upon telling people that you are vegetarian or vegan? Did you maybe hold yourself that this myth could be true? Please let me know in the comment section and feel free to suggest other myths I should post on.