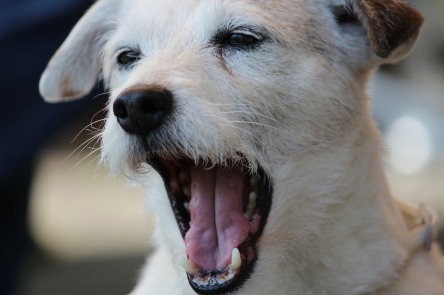 If you have a dog you probably know that dogs yawn now and then. But did you ever notice that they yawn as a response to your yawning? This phenomenon is well known between humans as “contagious yawning”, but recent research indicates that even dogs can “catch” human yawns.

In 2008, Joly-Mascheroni et al. conducted a study investigating whether human yawns can elicit dog yawns. To test this, an experimenter was together in a room with a dog, the owner being behind the dog. For five minutes, the experimenter tried to make eye-contact with the dog and started yawning when eye-contact was established. This was repeated over and over again, causing most dogs to yawn at some point during this period. In the control condition, the procedure was similar, apart from the experimenter performing “non-yawning mouth opening actions”.

The results were the following: 21 out of 29 dogs yawned in the yawn-condition while no dogs yawned in between the sessions or during the control condition. The dogs yawned after a mean time of 1 minute and 39 seconds. This is strong evidence that contagious yawning also exists between humans and dogs.

The researchers note that their results allow for different interpretations. Previous research indicated that dogs yawn during stressful situations. In this case this would mean that the yawning condition was somehow stressful for the dogs while the non-yawning condition was not. The other interpretation is that contagious yawning between dogs and humans is empathy-mediated. This would be supported by the fact that more empathic people respond more strongly to other people’s yawns in experiments with humans and by evidence that dogs are surprisingly good at understanding human social cues.

Some studies were performed afterwards yielding mixed results, supposedly due to varying methodology, such as using video-taped yawns. In 2013, Teresa Romero et al. conducted a study directly addressing the interpretation problem mentioned above. To address these issues, they had the owner and a stranger perform yawns to test whether owners can elicit more yawns, which would be expected by the empathy-interpretation. Furthermore they measured the heart rate of the dogs to assess whether the yawning-condition was stressful to them.

Their protocol for yawning vs. non-yawning conditions was similar to Joly-Mascheroni et al. The results showed that significantly more yawns were observed with the owner yawning compared to a strange experimenter yawning. Furthermore the heart rate data demonstrated that the situation was not stressful for the animals. This strongly favors the empathy-mediated interpretation of contagious yawning between humans and dogs.

Because the research on this topic is still relatively young, the mechanisms involved aren’t yet understood. For example, Teresa Romero et. al. mention that the evolutionary origin of contagious yawning between humans and dogs is unknown. It is especially difficult to interpret that dogs show contagious yawning together with humans but not together with other dogs. Thus, further research is required to address such questions.

I would be interested to know whether you can make your dog yawn by repeatedly yawning while making eye contact; I actually managed to do so. Please let me know in the comments.