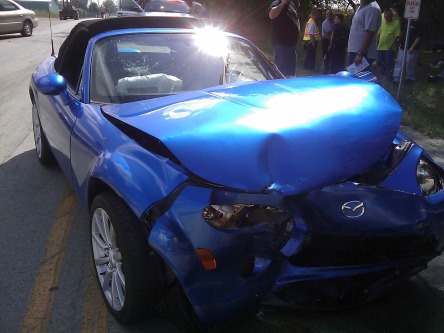 In 1974, Elizabeth Loftus and John Palmer from the University of Washington conducted two experiments [1] investigating the effects of the words used in a question about an event on the memory the participants had of this event.

In the first experiment, the participants were shown several car crashes and were afterwards asked to estimate at which speed the cars collided. Previous studies indicated that humans are surprisingly bad at estimating the speed of cars. After watching films of cars colliding, the participants were given a questionnaire concerning the accident. One question was “About how fast were the cars going when they X?” X was the variable in this case. The participants were divided in five groups, all having a different ‘X’ in their question: (1) contacted, (2) hit, (3) bumped, (4) collided and (5) smashed. The hypothesis was that the choice of verb can have an influence on the speed estimated.

Their results indicate that this was the case; the choice of word had a statistically significant effect on the speed estimate. The largest difference was found for ‘contacted’ vs. ‘smashed’ (about 9mph). While these results confirm their hypothesis, it is unclear whether this was merely due to response bias or due to a real modification of the memory the participants had of the accidents.

One week later, participants were asked to fill out another questionnaire including several questions concerning the accident. One of these questions was: “Did you see any broken glass?” There was no broken glass on the film, but the hypothesis was that the ‘smashed’ group might report having seen broken glass because they estimated the accident to occur at a higher speed – making the involvement of broken glass more likely. Their results confirmed this: People in the ‘smashed’ group were significantly more likely to report having seen broken glass than people in the ‘hit’ and ‘control’ groups.

This suggests that a memory of an event can be modified by things as simple as different wordings in questions about the event. While this particular study suggests high flexibility of memory, it is difficult to draw conclusions from it for real life events because it occurred in a laboratory study, including only films of accidents. As noted here [2], there was a study concerning eyewitness testimony showing relatively constant and accurate memory of an emotional event over time. This casts doubt on whether memory is as flexible as the Loftus and Palmer experiments suggested if important real life events are concerned.